In 2006, Somerville was named the best-run city in Massachusetts by the Boston Globe.

In 1972, in 2009, and again in 2015, the city received the All-America City Award. Close to world-class colleges and universities such as Harvard, MIT, and Tufts University.

Somerville is unbelievably mobile. It’s pedestrian-friendly with easy access to Boston’s MBTA Red Line and bus routes. Having a car isn’t a chore like it might be in Boston, and best of all, it’s a biker’s paradise. The tree-lined Somerville Community Path connects you with the rest of Boston on a scenic rail trail.

Want to know more about Somerville?

Get To Know Somerville

Somerville is a youthful area spread out with diverse, vibrant squares.

The Somerville School District is a multicultural school community dedicated to the realization of the full, intellectual, physical, social, and emotional potential of all students. In this pursuit, they maintain a safe environment that nurtures the curiosity, dignity, and self-worth of everyone.

When it comes to Somerville real estate, condominiums and multi-family homes built in the late 1800’s and early 1900s dominate. The demographics of this area consist predominantly of young professionals: young couples and single people that work in the city. 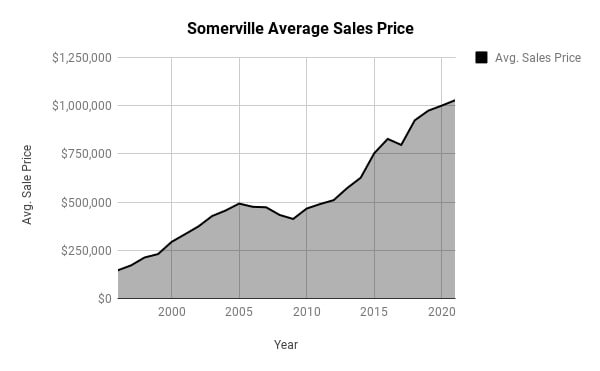 Added to the National Register of Historic Places in 1999, Rosebud American Kitchen and Bar is a Somerville institution. This lunch-car style diner offers some of the best late-night fare in the area, including go-to breakfast favorites, bacon scallion hushpuppies, Homestyle mac and cheese, all the pies you ever wanted, and a full bar.

While you’re in Somerville, you can’t miss a visit Assembly Square for shopping and restaurants or Davis Square for the restaurants, bars, music venues and nightlife.

Bright Horizons Teele Square is a small community of four Pre-K classrooms within the greater Davis Square and Teele Square communities of Somerville. They are a learning center that focuses on social emotional development in all aspects of their classrooms. They have supportive families acting as partners in their children’s first schooling experiences. They have a beautiful on site playground but still venture to local parks, libraries, fire stations, and restaurants so children can engage with the surrounding area.

They have an affiliation with Tufts University’s Medford Campus and have Tufts students volunteer to spend time with the children through their Special Friends program. They also have work study students from the university that provide great support to their current teaching staff. They have Tufts music and acting groups visit the center to do performances for the children throughout the year.

**School information and data was pulled from https://child-care-preschool.brighthorizons.com/ and GreatSchools.org

*All school statistics have been sourced from GreatSchools.org.